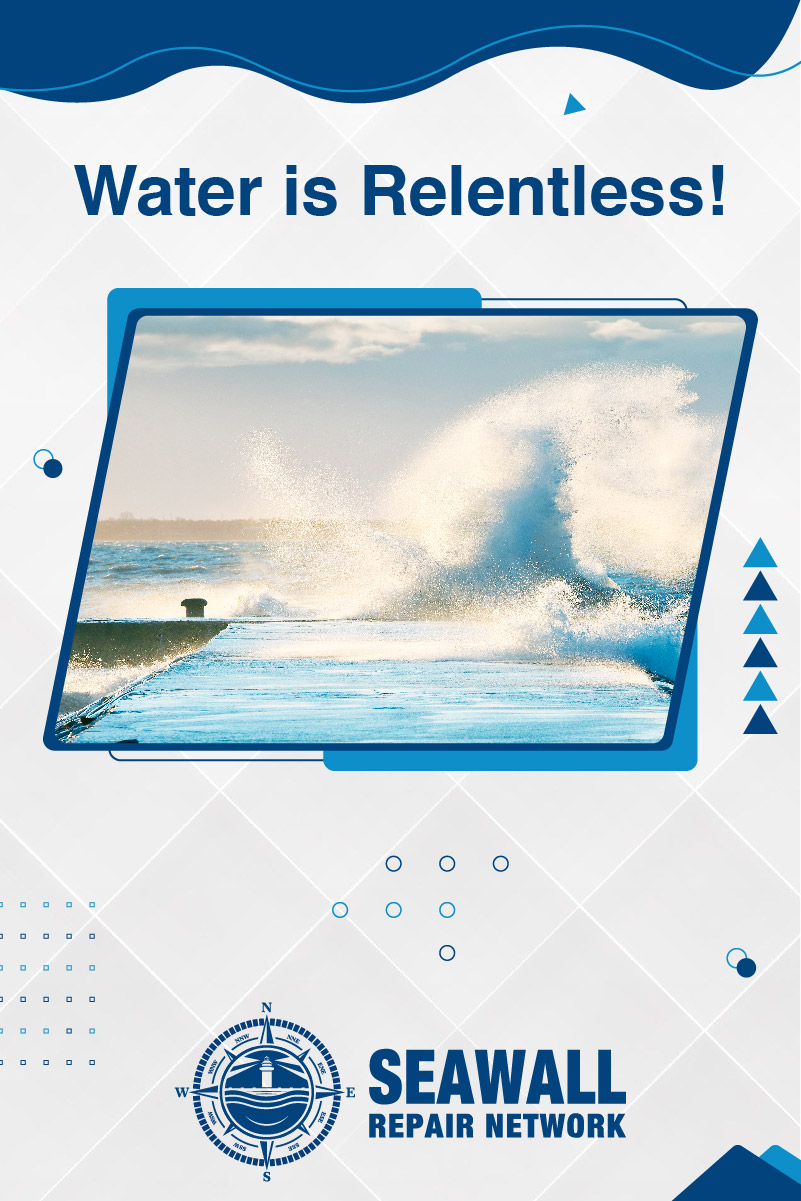 Water is relentless. This is a key fact that all waterfront property owners should thoroughly understand. The price of enjoying an oceanfront, riverfront, or lakeside view from the comfort of your own home is the inherent risk that comes with living right next to a large body of water.

If your residence is protected by a seawall, you should familiarize yourself with the four critical warning signs of seawall failure:

Excessive rainwater or floodwater build-up on the landward side of the wall (usually resulting from an inadequate or clogged weep hole system within the wall itself) will put untenable hydrostatic pressure on the structure. This pressure can cause parts of the wall to move and/or crack. Once the concrete is broken, landward side water will pull soil from your property through the wall and into the water on the other side, causing depressions or small sinkholes near the structure. In addition, steel rebar or mesh inside the wall is exposed to rust, resulting in rust stains appearing on the surface.

Once aware of these problems, you’re faced with four options:

You can read more about these four options on the Seawall & Bulkhead Replacement vs Repair page. Needless to say, any of the four critical warning signs should warrant a checkup from a qualified seawall repair contractor. Most contractors offer free professional assessments and repair estimates.

Fortunately, there are many effective methods at your disposal in the battle against water’s relentless onslaught. Seawall Repair Network® preferred marine contractors provide two major types of repair – seawall stabilization and seawall preservation.

Stabilizing a cracked or shifting seawall is accomplished via these four methods:

You can learn more about these methods on the Seawall Stabilization page.

You can learn more about these methods on the Seawall Preservation page.

Water is Relentless – But YOU Can Be Too!

There is no reason to be intimidated by water’s relentless onslaught. All you have to do is memorize the four critical warning signs, and then enlist a qualified seawall repair contractor when needed. With the proper stabilization and preservation support, your seawall can safely protect that beautiful waterfront view for generations to come. 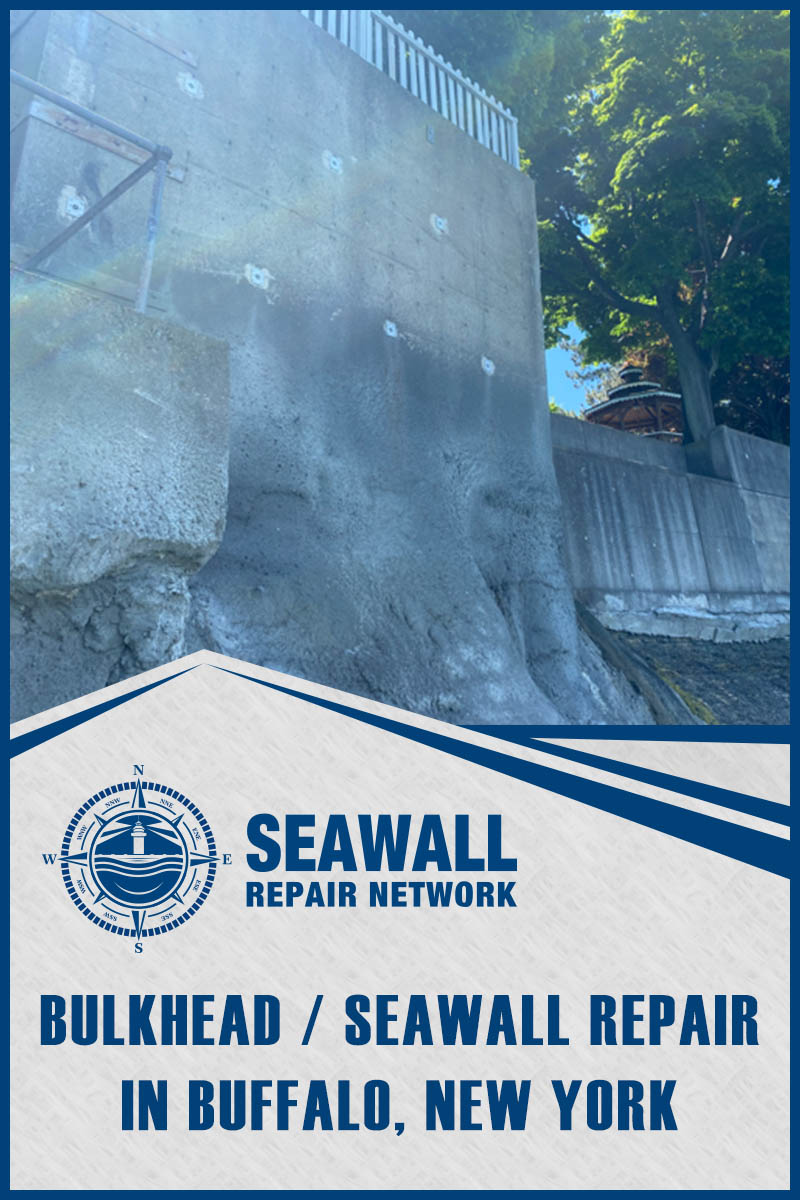 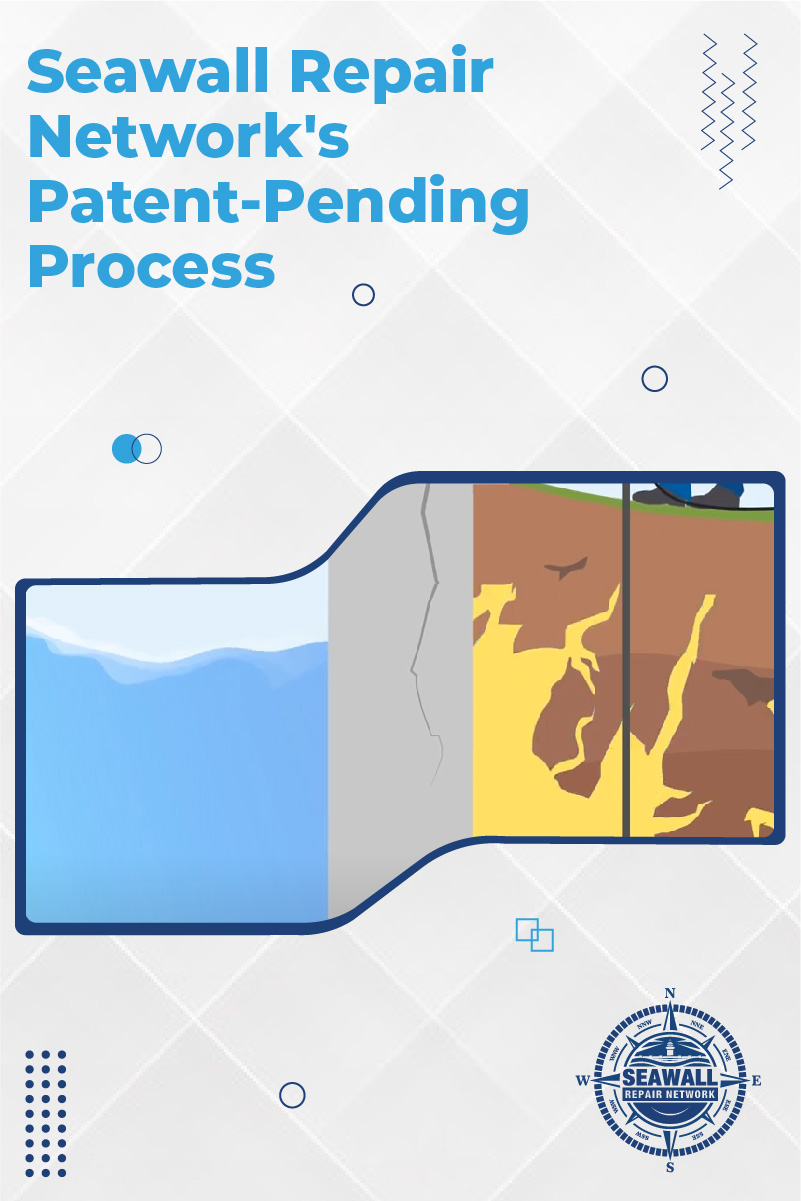 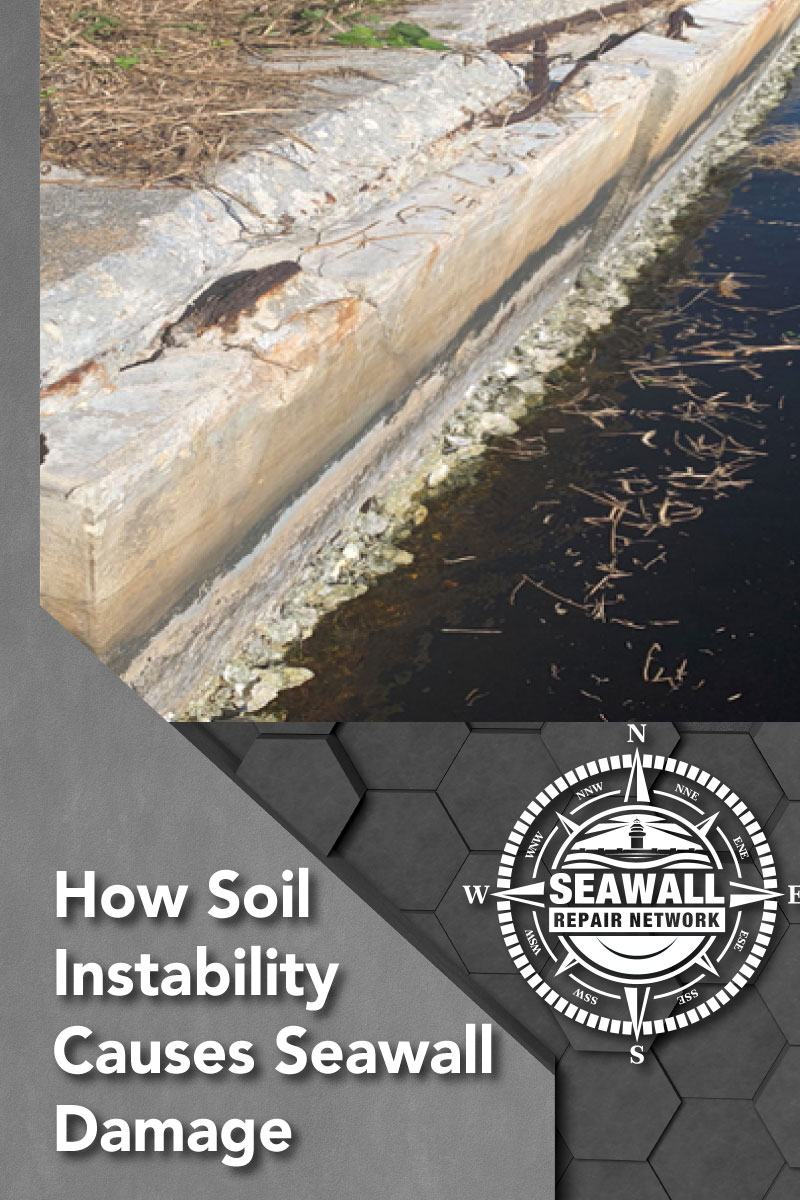 Causation: As seawalls age, soil eventually starts to migrate through the vertical seawall panel joints and weep holes. At the time of original seawall construction, a geotextile filter fabric is installed on the landward side along the panel vertical joints and weep holes. Filter fabric serves the critical function of preventing soil loss into the waterway from the landward side.

An essential point to remember is that seawalls are designed to keep the land in more than to keep the water out. Seawall structures are engineered to allow water to pass through seawall vertical panel joints and weep holes. The engineering concept Equilibrium of Hydrostatic Pressure refers to neutralizing opposing forces caused by water pressure on both the landward side and the opposing waterward side of the seawall structure.

Over time, all filter fabric begins to deteriorate and become ineffective. Once this occurs, soil migration begins to occur during every water event (rain, irrigation, daily tide activity, storm surge, etc.). A slow process initially, soil migration leads to void formations on the landward side of the seawall. Void formations immediately begin to jeopardize the overall stability of the seawall structure. The loss of structural stability leads to unwanted movement of the structure. As the movement of the structure occurs, damage to the seawall cap and panels also occurs, and stress on the seawall tie-rods and deadman anchors will lead to damage or sometimes complete failure of the overall seawall structure.

When considering the relationship between the various causes of seawall damage, simply think of the domino effect in order to clarify the complexities associated with seawall engineering:

Natural forces create a domino effect which causes seawall damage and eventually seawall failure if not mitigated and remedied in time:

Has your seawall been damaged by natural forces? Click the button below to download an info-packed guide to permanent and lasting repair.